One of the few photos I have (some of the cousins)

The backyard of the house we lived in, in the Bronx. (It was my maternal grandmother's house and when they all moved to California my grandmother sold all her NYC real estate and we  wound up moving into the projects.)

Little girl, lower left: Cousin Diane, youngest sister of my cousin Larry (the singah)
Older Girl behind her: Francine Adler. The Adler's lived next door. Francine's mother was my "Aunt" Bella, and from what I was told Aunt Bella was my staunch defender when I was little, little.  Francine sometimes babysat us even after we moved to Queens. Her boyfriend had the coolest car.
On Francine's lap: That's me, can't ya tell?
Boy in the center: Johnny-boy - my elder male sibling.
Brooding Boy on the right: Jimmy-boy. Older brother to Diane and younger brother to Larry (the singah). 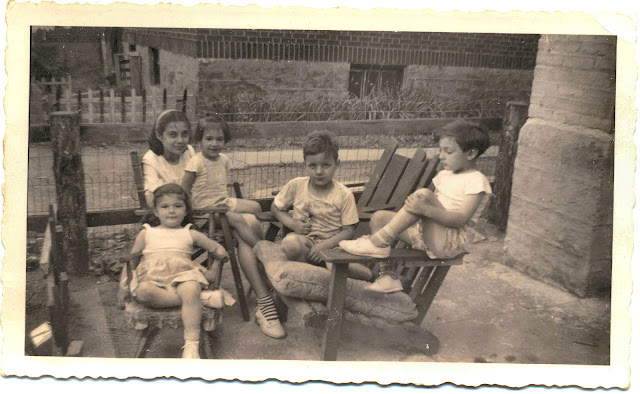