because sometimes nothing makes sense if you don't know where I'm coming from.

I was born and raised and lived, for 44 years, in New York City. Some folks, including the ones who live there, don't know that NYC consists of 5 boroughs - Manhattan, Bronx, Brooklyn, Queens and Staten Island. Only the Bronx is part of the mainland United States, the rest of the boroughs are islands or are on an island. And there are actually people who live in Brooklyn and Queens who don't know that they live on Long Island, I don't know where the hell they think they live but...I once had an argument with a reasonably intelligent, educated man about this. We had been out on the island, which in NYC means you went over the city line into Nassau and Suffolk counties. Luckily he had a map in the car and I pulled it out to show him that Long Island contained 4 counties, Brooklyn (Kings county for you purists), Queens, Nassau and Suffolk. Brooklyn and Queens being part of New York City and Nassau and Suffolk not part of NYC but only New York State.

Now then, for another little linguistic NYC quirk. Back in the day, my day at least, before Brooklyn became famous, Brooklyn, Queens, the Bronx and Staten Island were called the "outer boroughs" and Manhattan was called "the city" by all the residents. If you lived in Queens and were going into Manhattan you said "I'm going into the city'.  I was once accused of not really being from NYC because I referred to Manhattan as Manhattan, not the city.  Guy was a moron of course.  As it happened, from my late teens on, my work and social circles consisted of people from all over the world - and Manhattan, they understood, "the city" confused them. Eh.

I think, and I could be wrong, wouldn't be the first time, that most people think NYC (all of it) is mostly apartment buildings.  You kinda would be wrong if you think that.  With the exception of the 3 years or so that we lived in the projects, I always lived in a "private house". What's a private house you ask? What nowadays would be called a 'single family, detached house'. The outer boroughs pretty much look suburban. Truly they do. Tree lined streets, single family houses, front lawns, backyards, driveways with a 2-car garage (okay, maybe a single car garage. In my neighborhood it was all 2 car garages) at the rear of the property. Apartment buildings were clustered along the main drags (Queens Boulevard, Steinway Street, 86th Street etc.) along with all the shops and commercial enterprises.

Yes, yes - there were attached houses, and two family houses but they were mixed in with the "private houses". These suburban-type areas were usually just 2-3 blocks off of the main drags. And yes, again, Brooklyn is known for its brownstones, which originally were single family homes, and yes, they had backyards. We had a swing set in the backyard of our house in the Bronx.

Here's a photo of the house I grew up in in Queens... 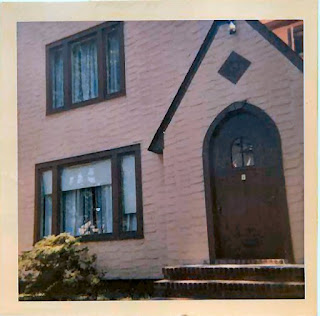 There was front lawns on both sides of the front walk, a decent sized backyard and on the left there was a long driveway that led to the back of the property to the 2-car garage.

I have to be honest here, I don't actually know much about Queens because all the years I lived there, whichever part I lived in, were just places to keep my stuff. I never spent much time in Brooklyn either, and we moved from the Bronx when I was 8 and only went back to visit relatives. Staten Island is a total blank. Manhattan was my bailiwick from the time I was finally allowed to go into the city on my own.

All of this is background to the smallest and tiniest of stories I will post tomorrow. But as we go forward this information might prove useful and save me writing, and you reading, if I can just refer to this very basic, and long, back story.
~ ~ ~ ~
(I just re-read this and hoo-boy there is so much more I could add. So much more I could explain. If anyone reading this is from NYC and you want to jump on my case for leaving out a lot of info - please don't. Yeah, yeah - Manhattan brownstones, Inwood et al - I know, I know. If people are truly interested they can research it themselves. What am I, a tour guide?)